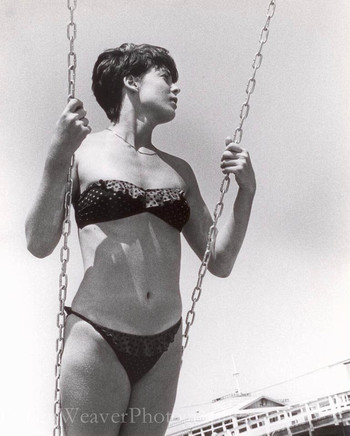 They say you always remember your first time. I know I do.

It was a nice summer day, the breeze was blowing, we were on the beach. We were both young, in our 20s and without a care in the world.

We were surrounded by people, but we didn't notice them and they didn't notice us. Her boyfriend stood by, offering her words of encouragement as I directed her to turn her head a little to the right...a little more…

On that summer day in 1986, I captured the first deliberately composed portrait I'd ever taken. There would never be another first. I hoped it was as good for her as it had been for me.

The photo was taken, nothing more could be done. How would it look? Was it properly exposed? It would be days before I found out.

Turns out it was great and, to this day, the image above remains one of my favorites; a black-and-white portrait of a woman whose name has been lost to time.

The next decades would be spent working and building a career, but there was always a camera nearby, even for "just" vacation photos. When 2011 rolled around, I was going through my files and I came across that photo...a tall brunette looking off into the distance while standing on a swing at the beach. Summertime captured in 8x10”.

Twenty-five years had passed since that image was made. I wondered what became of her. Had she married? Did she have kids? Did she pack up and become a world traveler? Was she even still alive? There’s no way to know. My mystery woman is an early-20s college student, and forever will be.

But in the intervening decades, something in me had changed. Ordinary vacation photos would no longer suffice. I needed to create. I needed to get back to photography. I sold a bunch of items I no longer needed, got a digital camera, and haven't looked back.

So, why does this story matter?

On that long-ago summer’s day, I had only a basic idea of what I was doing, but knew what I wanted. I wasn’t afraid to experiment or make mistakes. I’m still not. These happy accidents have been some of the best photography I've created, the results of applying what I do know to that which I do not.

Turns out my happy accidents may not be as accidental as I once suspected, because it seems I've always had an eye for photography. I made people look good. I make places look fun and interesting. I make animals look adorable and sports look exciting.

And, as your photographer, I can do that for you.

Call me, and let's find out how.

p.s. No, that's not me in the photo...I've a face made for radio.
© Tim Weaver Photography
Powered by ZENFOLIO User Agreement
Cancel
Continue